The first stop of our Long Study Tour for the Urban Studies Program was Vienna, Austria! I had long known of the city as the home of Mozart and Freud but not much more so I was excited to check it out.

We had a relatively early flight to catch on Saturday morning, and I smartly decided to stay over at my friend’s apartment the night before as she lives a 15-minute metro ride from the airport, rather than the hour journey I would’ve had from my home stay. So while we were exhausted, we were on time. Others in my class were not as lucky, and we had a few people arrive just in the nick of time. The flight was only an hour (it seems everything in Europe is only an hour flight away!) and we were soon off to our hotel in Vienna. 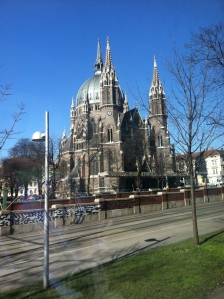 My initial impression of Vienna was of all the amazing old amazing building, but as we were walking to grab a quick lunch we were shocked by how quiet the city was. It was a Saturday afternoon and we were downtown but we suddenly realized we were the loudest thing for blocks- even louder than the traffic and trams. I realize that Young Americans are known worldwide to sound like screeching, screaming animals, but this was an unusual case. This city just seemed so calm!

After lunch we got a great walking tour to get acclimated to the city and then officially celebrated the start of our trip with a group dinner at Glacis Beisl, a lovely restaurant in Vienna’s museum district.

Mackenzie in front of Glacis Beisl

The next day we had a stellar breakfast at the hotel. My favorite part were the bottles of Kombucha (a fermented tea drink). Other highlights included Mimosas, fresh fruit, the spread of various meats and cheeses. Thanks DIS!)

Today was a Sunday so we had the opportunity to attend a mass that the Vienna Boys Choir was performing at. This choir is world-famous and the performance was amazing. 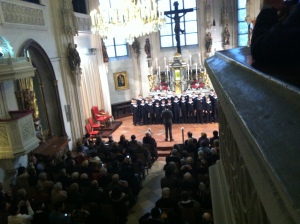 Afterwards we headed over the University of Vienna and had a shore lecture by Tatjana Henfling about historical developments and the current trends in Urban Planning in Vienna. It was interesting to learn about the techniques that Vienna uses to keep housing in the city affordable. Basically, it is not that hard to qualify for social housing in Vienna, and it has much less of a stigma than in does in the US. Vienna also has a form of rent control for social housing in that everyone pays the same amount per square meter.

Our next stop was the Bahnorama which is basically a huge tower and exposition center that shows-off the construction of the new Main Station in Vienna. Once the Main Station construction is finished, it will be a huge deal for the surrounding neighborhood and for transit in Vienna in general.

View from the Bahnorama of the railway construction

After the Bahnorama we had some well-deserved free time. Some in our class decided to check out some of Vienna’s great museums such as the Leopold Museum. I and a few others decided we wanted to get to know the city better by being outside and also engaging in Vienna’s famous cafe culture. We first went to Cafe Phil, a cute, very hip cafe, and got sandwiches. Afterwards we tried to check out the famous market but it was closed since it was a Sunday. We didn’t really mind though because we got to check out more of the city by walking around.

A friend of ours told us about a temporary ice skating rink in a park so we set out to find it. I’m so glad we did because it was SO picturesque. The food at the little winter market surrounding it was also amazing: we all got smoked salmon and potatoes and mulled wine.

The most amazing setting for an ice-skating rink

We then went to Cafe Hawelka which is a traditional Viennesse cafe. Interestingly, we ran into our Professor Thorsten while we were there, so it must be good if he frequents it.

We then went on a quest for the famous Viennese Chocolate cake. The recipe originates from the cafe of the  Hotel Sacher, so that is where we headed. When we got there, we were at first shocked at how fancy and upscale the cafe was. The patrons there were so quiet and proper that our group probably tripled the decibel level when we entered. We had a very difficult time containing our laughter. We all ordered a slice of the torte, which was pretty affordable (about 4 Euros) for such an upscale establishment. The cakes looked sublime on the plates but as we each took our first bite, you could see the look of disappointment travel around the table. Honestly, the cakes were not that good. The apricot filling just made the entire thing taste pretty dry and bitter. It was definitely overrated but the experience is funny to look back on. As soon as our group left the cafe we let out a collective laugh and sigh of relief. It was difficult for us American girls to be so quiet while eating chocolate cake! 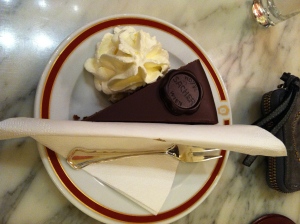 Our last day in Vienna and we visiting the Exhibition Center for Urban Development. Vienna, like many European cities, in the midst of a re-visioning of it’s urban center to meet the challenges of the future. Vienna’s plan is called “Wien 2025” as their goal year is 2025. One of the awesome parts of the plan is that they value participation of the communities very highly, so many attributes of the plan were developed through close works with city residents who would impacted the most by development projects.